We all are familiar with that moment in a new relationship when, no matter how well things seem to be going, we feel the need to stop and analyze it. Does he/she really love me? Is this just a fling or something more lasting? Do we have what it takes to go the distance?

Yes, and we’re just as familiar with that sinking feeling that occurs when the mere fact of asking those questions – of interrupting a process in order to impose mental order on it – slows the momentum of the relationship or, worse, brings it a grinding halt. 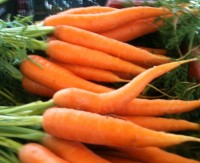 Many years ago, in similar circumstances, I sought counseling as a love affair teetered. I’ve never forgotten the words of my very wise counselor: ‘You can’t pull up a carrot to watch it grow.’

This is one of those lessons in life I’ve tried to apply to many situations – among them, of course, my writing. Are you tempted, as I am, at various stages of the writing process to stop writing and start analyzing your work? What generally happens next is that pages are torn up or tossed into the computer trash bin. You start to question where you’re going, and next thing you know you’ve killed your fledgling novel/memoir/essay by imposing a critical eye too soon.

Here’s another lesson, this one from the leader of a brilliant screenwriting workshop I once took: ‘Don’t get it right, get it written.’ In his quite extensive experience, he had seen far too many first-time script writers finish ‘Act I’ of their movie, stop to analyze it, and decide to start over again. Wrong tactic, he said. As counterintuitive as this may seem, the right strategy, in his view, was to stop thinking and keep writing. Just keep going – you can revise later.

Well, of course he didn’t actually mean to stop thinking. But in the creative process, rational thought can all too often interfere with the surfacing of a deeper kind of thinking. Let’s call it intuitive thinking, the kind that allows an idea tucked away underground to rise to the top.

When I’m in the initial stages of a writing project, I seek out situations that favor this kind of thinking. In my personal lexicon, I refer to it as ‘dream time’. Get on a bus, look out the window and don’t think about anything much at all. Or head into the shower and let the water flow as your mind wanders any which way. And then, suddenly, an image will appear that removes whatever obstacle you may have been struggling with.

By not thinking too hard, you’ve opened the gates to a different part of your brain, the part where creativity blossoms.

‘Dream time’ also functions in a literal sense, I’ve found, when faced with a thorny writing problem. Very often, as a journalist with a big feature to write, I’ve gathered the facts and quotes but then struggled to find a way to present them most engagingly. I’ve got the story but I haven’t got the intro, known in the profession as the lede.

What to do? Sleep on it – i.e., stop thinking. Then in the morning, when you’re least expecting it, just making the coffee and not fully awake, an image will pop into your mind. And there you have it – the perfect lede.

A recent article in The New York Times described another way to address this issue. To unleash your creativity, Gretchen Reynolds wrote, ‘take a walk.’ She cited a recent study showing that ‘walking markedly improved people’s ability to generate creative ideas.’ In other words, stop thinking so hard. Do something else to allow your brain to tap into its hidden resources.

My latest experience with this phenomenon happened just this morning. I sat down to write this blog post and used the word ‘carrot’ in the title. After writing a few paragraphs, I got up to fetch some something from the kitchen. While walking back to the computer, a new idea sprang up. Dostoyevsky had been the last thing on my mind, and yet there it was – ‘Notes From Underground.’ The title that best captures the thoughts I wanted to express.

Our minds work in mysterious ways. We cannot always unearth what we want to say by consciously digging for it. We have to leave the creative process alone to allow our ideas to grow. And by making this effort, we are very often rewarded.

As writers, we need to resist the temptation to get everything right on the first draft. Of course we need to go back and revise – to take the sculpted object and refine and polish it. Sometimes to remodel it more extensively. But not too soon.

‘Don’t get it right, get it written.’ For me, that was a great piece of advice. Do you agree?

This post was originally published on She Writes, a great site for women who write.

2 thoughts on “Notes From Underground”