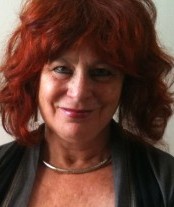 Meg Bortin is an award-winning American journalist and author based in Paris. As a reporter and editor, she covered international affairs for 30 years, with postings in Paris, London and Moscow. In 1992, she was the founding editor of The Moscow Times, the first independent English-language daily in Russia. She was a senior editor at the International Herald Tribune, and has written for many other publications. Many of her articles can be found at nytimes.com.

Literary works by Meg Bortin include a memoir, Desperate to Be a Housewife (Mirabelle Books, 2013), and a personal essay, Dear Djeneba, in Family Wanted: Stories of Adoption (Granta Books, 2005; Random House, 2006). She currently has two works in progress: Footprints Through Time: A White Mother’s Search for Common Roots With Her Black Daughter, and a novel about seduction and literary piracy.

While completing her memoir, Meg Bortin received fellowships to two writing programs, the Norman Mailer Writers Colony and the Southampton Writers Conference. For her work in journalism, she was honored by The New York Times with a Punch award for outstanding performance in 2007. In 1996, she was awarded a Knight fellowship and spent five months teaching journalism throughout the Philippines.

She holds a BA in French and history from the University of Wisconsin (Phi Beta Kappa) and an MA in French from Cornell University, and has taught journalism as an associate professor at the American University of Paris and creative writing at Wice, an Anglophone cultural association in Paris.

She is also the author of a French culinary blog, The Everyday French Chef. She lives in Paris.